I’m building a general election-themed Twitter bot for giggles. It tweets out generated campaign phrases from fictitious candidates. I thought it would be a good idea to check press releases from the various political parties to see if they could provide more phrases to add to the bot’s repertoire.

What should have been a simple exercise in adding some feeds to my RSS reader turned out to be anything but. I searched for ‘labour party ireland press releases’ and duly clicked on the first result I was shown. This took me to a 404 page.

I scrolled to the bottom of the page and clicked on the link marked ‘RSS Feeds’. This also took me to a 404. 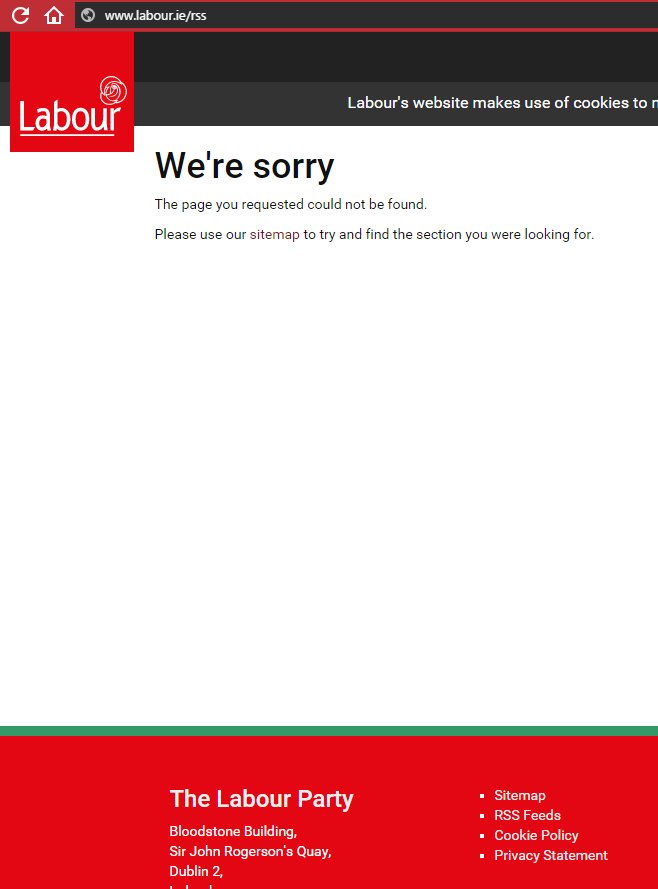 After some brief poking around I did find the feed and chucked it into my reader. A first success.

Next I toddled over to finegael.ie, only to find it was down. No holding page or anything, just not working at all.

Update: The Fine Gael site was back online when I checked about two hours later. Coherent and accessible ‘Latest News’ section, no discernible feeds.

Undaunted, I moved on to fiannafail.ie, only to discover that there seemed to be no discoverable RSS feed at all on that site.

My next stop was sinnfein.ie, which was by far the easiest of the lot. There was an easily accessible ‘News’ section with dated entries in reverse chronological order. There was a link called ‘RSS Feed’ in the footer. I put this into my reader. It worked. I moved on.

Surely those champions of small business, Renua, would have a slick digital communications operation? Sadly not. The page titled ‘News’ was a strange collection of undated things that may or may not have been issued as press releases. Some of them were certainly structured and phrased as if they were press releases. The entry at the top of the page, so presumably the latest one, was just a picture of the cover of the Electoral (Amendment) (Moriarty Tribunal) Bill, with a ‘Continue reading’ link underneath it. Following this link led to a page with an embedded copy of the bill, free of any commentary and context.

So how about the Social Democrats, Ireland’s newest party? There is a news page which is easily accessible straight from the home page, the items have publication dates but there’s no feed.

I know that RSS never quite caught on in the way it could or should have, but it’s disappointing to find such overall clunkiness in the way parties are doing their digital communications. Adding this stuff is pretty simple. Not having it is a strange omission.