“This demand for unalloyed positivity is exacerbated by a reactionary grievance culture in some corners of the tech industry that interprets critique as persecution, in part because of a widespread belief that good intentions exculpate bad behavior. Why be critical of people who are just trying to change the world? (Through their casual gaming app that allows people to group digital candy in sets of three, or their gig economy platform that has the effect of driving wages well below standard minimums, or their social network that may be responsible for an active decision to algorithmically distribute disinformation because that’s what the customer apparently wants?) Why be so negative all the time? Why be negative at all?”

Back in the mists of time when the Internet was young, we used to share a piece of advice with friends and clients which could be roughly phrased as 'don't write anything on the Internet with your name attached that you wouldn't be happy to see on a billboard near your house'. There were many variants of the same advice such as 'don't put anything on the Internet that you wouldn't be happy for your grandmother to see on the front page of her local newspaper while drinking her morning coffee', and so on. The message was that nothing can ever really be effectively removed from the Internet, and statements made may well come back to haunt you at some unspecified point in the future.

This was all long before social networks and nymwars, and a parade of mildly salacious stories about people losing jobs or not being hired in the first place because they'd posted opinions or pictures online that marked them out as being 'not a good fit' or whatever the euphemism du jour was. This resulted in people being somewhat more cautious in what they posted online and who they allowed see it, which was a good thing. A vague understanding of the permanence of things on the Internet became ingrained in the collective consciousness.

This week we're seeing the reverse of that, that plenty of things on the Internet are far from permanent, and that the Tories might be able to take away your lovingly curated lists of recipes because recipes on a website are a projection of soft imperialist power – no, I've no idea how Osborne got there either.

The Internet, a land of transient permanence, in which the bad things can hang around forever while many of the good things go away.

And every website looks the same, because people are lazy and unwilling to take chances. When I worked in web design and development around the turn of the century we had to work hard to convince clients that this was a different medium and they shouldn’t just shovel their existing marketing collateral onto their domain. Brochureware was everywhere.

Forbes was still writing about brochureware in 2010.

I recently came across online design package Visme, which among many other things will produce presentations. Rather grimly, the lacklustre template design of contemporary website has now slithered its way into presentation templates. 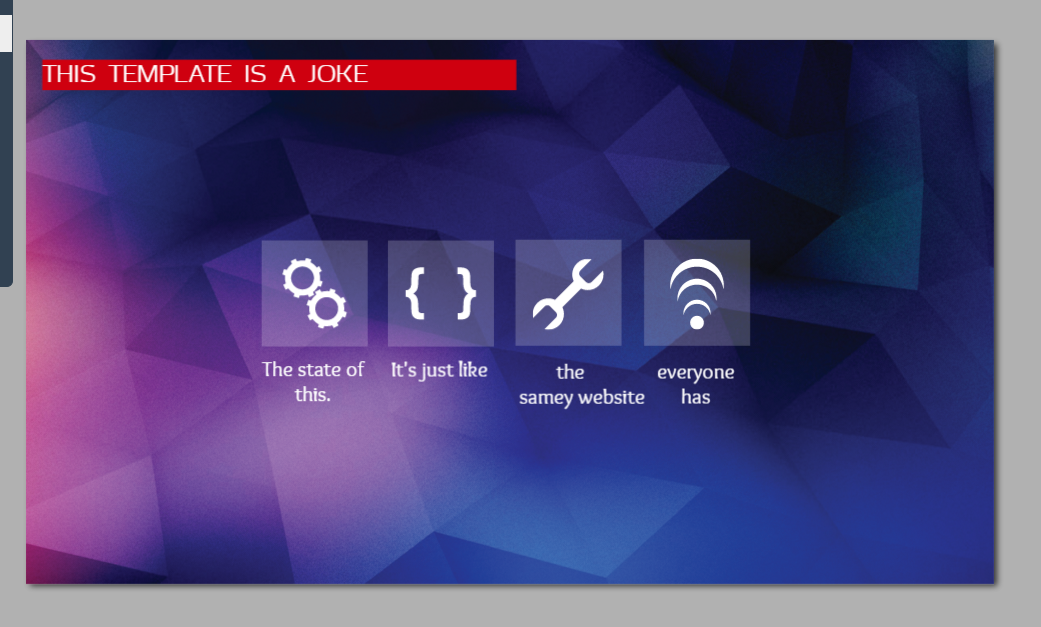 Of all tyrannies, a tyranny exercised for the good of its victims may be the most oppressive. It may be better to live under robber barons than under omnipotent moral busybodies. The robber baron’s cruelty may sometimes sleep, his cupidity may at some point be satiated; but those who torment us for our own good will torment us without end, for they do so with the approval of their consciences.

I half heard this new science breakthrough / discovery story on radio news bulletins from both RTE and BBC during the week. “Careful out there folks, you can catch Alzheimers” cautioned the story. Scientists said so, apparently.

Over the course of the morning it developed a little, into the more specific “Alzheimers is definitely contagious and you can catch it from surgery and trips to the dentist”. By evening I think it there was more interesting news to mangle and this story had disappeared from the bulletins.

I gave it the usual mental shrug I save for stories like this, decided it was highly unlikely any of this was true and thought no more of it. If I hadn’t been busy with something else during I might have put in twenty minutes poking around online to find out a bit more.

Turns out it was rubbish. Which yet again leaves me disappointed that news outlets in the should-be-better–than-that category just aren’t any better than that, and disappointed that I can routinely disregard large swathes of the news as just wrong.

I see Slack working well in some companies, but in others it's "the Ultimate Workday Distractor" http://t.co/vsnXywrP05 More on the Wrongly Attributed Statement from Crooked Timber. In a break with usual Internetting policy, I highly recommend reading the comments. There’s some great material in there.

Every two minutes on Twitter, someone tweets, “The only thing necessary for the triumph of evil is that good men do nothing” and wrongly attributes it to Edmund Burke. Burke never said any such thing. But the myth persists.

This week’s documentary of the week from BBC Radio 4 is on the Shipping Forecast. Essential listening if you’ve ever been lulled to sleep by the forecast, or daydreamed yourself away to the faraway places conjured up by it.

Design + stealth + subterfuge + war = the story of the US Army’s ‘Ghost Army’ in World War II.

For adventurous recipes, ask a supercomputer. Specifically, IBM’s Watson. Listen to the background above and  get your own nightmarish yet delicious suggestions from Watson here.

Two grown men watch and review Sex and The City 2 once a week, which really is a terrible idea. It is pretty entertaining though

Whilst you’re listening to those, you could do far worse than having a quick read of this, which is day-to-day reality for women on this planet.

Now you sit as close to the driver as possible but it sometimes means a split-second judgment call on whether the man in the seat beside your prospective seat looks like a weirdo. You wonder which seat is the safest. You text your friends to let them know you made the last bus.